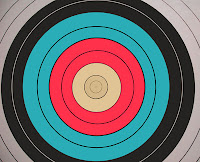 I press toward the mark for the prize of the high calling of God in Christ Jesus.
(Philippians 3:14)
What was Paul pressing toward, what was this mark he was speaking of? It might seem obvious that he was speaking of a spiritual prize, but a cursory look around the church world today would reveal that we are missing the mark, we are not longing for and pressing on and into that thing about which Paul was speaking of. Because we take our salvation as a common thing, as granted and over and done with, and because we still have that old man of sin still kicking around in our fleshly members, we have substituted the mark for other targets, namely Money, Influence, Success, Significance. These have become the standard of spirituality in the world today. Sin is defined as missing the mark, and if we have a different mark than God, well then of course we will miss it.

By aiming at the wrong target we are guilty of M-I-S-S ing the mark. When these things become the measure of our sanctification we are as deceived as the rest of the world. We say we don’t do this, but how many times have we looked to someone who seems successful as our spiritual mentor? How is it that the pastors of mega churches seem to be listened to when some of their doctrine and practice is as horrible as any self-help book out there? Why do so many come, supposedly to Christ, and yet they think that God is supposed to bring them up the social ladder. Friends the social ladder is real, but it leads down into hell. Upward mobility isn’t the upward call, and upward mobility isn’t as important as spiritual mobility. Spiritual mobility is where God can move you to any situation and yet you will still be content.

Paul had all these but gave them all up. As a Pharisee he had all the clout that any Jew could have. He had influence as a member of the Sanhedrin, he had studied under a storied rabbi, and was known throughout his world and beyond as a man to be reckoned with. As much as any Jew at the time, Paul had money, influence, success and significance. Yet he left all this for beatings, jail, being despised, and the trials of being the Apostle to the Gentile nations. No, those things he left behind weren’t the mark he was speaking of. The prize is the high calling of God that is in Christ Jesus, all the other stuff is a wrong marker, and it is missing the true mark.

We all seem to want to be skilled Christians, and by that I mean Christians who are skilled in the ways of the world. We want money, influence, success and significance. We are M-I-S-S ing the mark that God has set, because we don’t have our eyes on the real prize. You see skill is being able to hit a target consistently that others miss. But genius is being able to hit a target that no one else sees. As Christians we are not in this to be able to hit worldly targets that we couldn’t hit before. That is not what God is helping us to aim at. We are to hit the target that God sets and no one else sees.
Can you see the mark of God? Don’t ask God for money, don’t seek to be influential, don’t knock on the door of success, and don’t desire to be significant. Instead, be a spiritual genius. That is the upward call, the mind of Christ.

And then from the congregation we hear two responses:

This is indeed a timely post! I wish more young people would hear this message. They are, unfortunately, being saturated with the mis-information that "bigger is better" and that being a Christian is a means of elevating themselves here on earth.

Keep on preaching this message!

The problem is that some would use that very verse, Matthew 6:33, and then declare that if you follow God that things such as M-I-S-S will follow you, that God desires for all His children to have these things in abundance on earth (John 10:10, they will say, among others)...

Yes we will get "things" taken care of, but how much we do not know (although we hear 30,60,100 thrown around out of context a lot), nor should we really care.

Indeed seek ye first, then God will care for you, but not always in the way we want, and I would contend that those whom seek Him thusly are not actually seeking Him at all, but seeking what He can give them.

Of course I know what you meant, Jonathan, but you also know how easy it is for someone to twist the text to say what they want it to say.

"We are King's Kids", of course we should expect "favor" they will say...

To that I reply, "Yes, we should, and so that we know of what kind of favor we will get, what did His #1 kid get, and how about His cousin?"

The sad part is some problably do not even know they are. Thinking that they are doing the work of the Lord. I am reminded of a sermon I heard on the radio not too long ago, though I don't remember who it was. He was talking about frogs and that if you were to drop one in boiling water it would jump out immediately, but if you put the frog in cool water and heated it to a boil the frog would never jump out and eventually die. I think some, not all, have slowly been deceived and dragged countless others along with them believing that because they are doing what this man is teaching they are doing God's will.
My past pastor used to say "What one generation accepts the next generation embraces."

You missed a few letters in your acronym:

Which of course gives you the full Acronym: MISSISSIPPI. ;-)

LOL...the funny part is on our honeymoon, we went through that state and I had several not so pleasant experiences there...

This is a repost from several months ago (last October, I think), but it goes along with other things we have posted lately...

In Christ we are significant, but people are all too often trying to seek worldly significance, as if that is what will make their "witness" more credible, instead of living the crucified life and being filled with the Spirit...

Thanks for keeping the Word pure. Good teaching.

The Joel Osteen's & Robert Schuller's of our day tickle ears in all these ways you have shown, and people like it. And for some reason it seems to work for a good portion of those who listen, which is so sad, because they are missing eternal life for temporary success.
And then there are those who are discouraged, and brought low, because they have followed these empty clouds.

Pastor Williams is finishing up 2 Corinthians and last (Saturday) night he was covering 2 Corinthians 12:1-10 - Paul's thorn in the flesh. It is amazing that Paul was denied healing (whether you believe it was physical healing or otherwise I don't think matters) three times. Did Paul not have enough faith, this one who had seen the third heaven?

Sometimes Pastor Williams pointed out, "No" is the best answer. Not success, not wealth, not health, but being left in a situation we do not want to be in so that Christ might be formed in us.

But most "evangelicals" seem convinced that will not "sell" in 21st Century America.

People need to see Christ demonstrated in all sorts of situations, and that is one reason why we are left in those situations, so people can see Christ's light shining in a dark place....

Just a little sidebar......baaaa....the sheep are anxiously awaiting the return of their shepherd (little s)...the shepherd's wife, too. :)

Chris, we had a great time, and we are also glad to be home...