What is Your Passion? 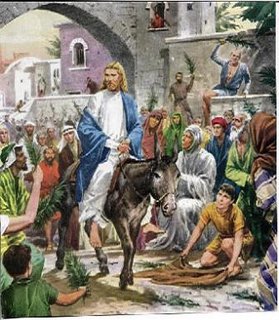 He knew very well that the religious leaders had arrested Jesus out of envy.
(Matthew 27:18 – NLT)
Palm Sunday was all about a misunderstanding of power. The people were shouting hosanna in the hopes that Jesus was about to rid them of their Roman rule. However, Jesus was not about to lead a political insurrection, but a spiritual awakening. His revolution had eternal purposes. The same people that were claiming Him as king would just a few days later curse Him as counterfeit. It seems that the passion of the people had changed during the Passion Week, but the truth is, the people were looking for a different Jesus than the real Savior.

The people had wanted to make Him king (John 6:15). How many of us want “King Jesus” so long as He is going to take away our “social shackles”? Jesus, however, said that His kingdom was not of this world (John 18:36). Why then do we want to “fight for our rights?” He didn’t see Himself as victim; He was the ultimate victor. Yet they wanted another Jesus, Barabbas (son of the father – Matthew 27:16-17).

We see this mentality manifested today in Dominionism, Reconstructionism, Kingdom Now, Joel’s army, etc. We seem to think that we need to “take over” the systems of this world for Jesus. We deceive ourselves; whole movements deceive themselves into thinking that Jesus wants us to take over this fallen world in order to usher in His return. It is the same old story. The question is, do we want Jesus, the political savior, or Jesus the true Savior?

On an individual level, we act as if Jesus came to take us out of our disenfranchised state. We think Jesus is the key to the ultimate life, our best life now, or the secret to finding our purpose. Now Jesus did come to liberate us, not from our social situation, but from our sinful situation. And so we are not to preach a social gospel, or go too far into what is known as “liberation” theology, where the “gospel” that is preached is primarily about the emancipation and empowerment of individuals against “the man”; which is whatever power is seemingly holding them down.

One mega church pastor in our state sells the idea that God wants you to move up the social ladder, from struggling, to stable, to successful, to significant. It’s an easy sell to our flesh and its desire for self-rule, but Christ is concerned about your “spiritual mobility”, not your upward mobility. The prevailing notion that God wants Christians to have worldly success or influence so that they will have respect, an audience, a platform and be listened to is garbage.

That being said, Jesus does indeed give us a new standing as members of the Body of Christ (Galatians 3:28-29). The key to having the “right Jesus” is to know His role as liberator (John 8:33-36) and our role as the liberated (Galatians 2:20).

We want to worship the God who worships us. When He demands our allegiance, without earthly recompense, and brings us hardship instead, we become hard hearted against Him. When He tells us to take up our cross, we demand He be placed on the cross instead. Consider again the triumphal entry of Jesus into Jerusalem. They thought they knew who He was, but when He was something different than what they wanted they turned on Him, much as we turn our backs on the real God, and instead worship a God of our own desires. Are your passions stronger than your Jesus?

Labels: Devotional, Think About It

"You say you love the Baby, but then you crucify the Man." (old song)

Thanks JD. It is a good reminder that the focus of Jesus' ministry was spiritual, particularly in light of the theology of self-esteem so common today.

”Better is one day in your courts than a thousand elsewhere; I would rather be a doorkeeper in the house of my God than dwell in the tents of the wicked.” Ps. 84:10

What a great post!! I wish I could have heard this in a sermon format.

Yeah, you would have heard me talk of how the women showed the way, they weren't the ones who ran from Jesus as He was going to the Cross...

For the record, I am complementarian, but we dudes need a lot of lessons in a lot of things, for sure...

This was originally posted October 2006, but another that I felt needed to be seen again...

Man, I sure do love you Brother. After spending some time "on the front lines" with hard core atheists, humanists and false Christians in blogdom, it's refreshing to drink deep from the well of truth you are sharing here. I appreciate your strong passion for Jesus, and of course, I am absolutely bananas for our strong Lord Jesus.

Craver, right back at ya...