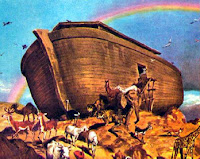 By the word of the LORD the heavens were made, and by the breath of his mouth all their host.
(Psalm 33:6 – ESV)
It is offered as a refutation of the Bible that all the biological diversity of the earth today could not have happened coming from the relatively few species able to be on Noah’s Ark. That simply isn’t rational, we are told. At first blush it may seem as if this really is a strong argument. I mean, there are all sorts of creatures we are still discovering, and hundreds and thousands of types of animals today, aren’t there? And take the fact that you have to divide the space on the Ark by at least two, because there had to be a male and female taken on the Ark, and some of them were taken in by sevens, so wow, how could all of this come from all of that? Indeed, it seems to be a most perplexing question.

Well, if that is the rationale against the Biblical record, and if that is such a problem, then I have another question. If so much couldn’t come from so few, then how did all the biological diversity of the earth come from the first species, or from some singular primordial goo? How can so much come from almost none? How did one animal give way to hundreds, thousands, etc.? Considering the original argument, if it is so impossible for it to happen with the animals on the Ark, how then of less?

Now, if the God of Creation could create something from nothing, then the Ark event is not so hard to imagine. Yes, we realize that our explanation of this would probably be unsatisfactory to a skeptical person looking to “disprove” the Bible. Of course we cannot prove that the universe was made out of nothing, by the decree of God, but it is reasonable, rational, and it accounts for what we have in the world. And when we start by looking at the human condition, and what the Bible says about it, this provides further evidence that what has been revealed to us in the Scriptures is indeed true.

Science is not a bad thing; we have depended on its advancement for many of our modern ways. But what can science tell us about sin, what advancement can it make over what the Bible reveals as our human condition, and what can it provide as a superior solution to sin than Jesus? So you may not believe in Noah’s Ark, but do you believe in the Cross of Christ?

Jesus said, "But as in the days of Noah, so shall also the coming of the Son of man be."

First let me say that I believe fully in the accuracy of the story of Noah and the Ark. I fully believe in the inerrancy and the sufficiency of Scripture.

But let me give you a possible response to your question. How did everything come from this primordial goo and yet could not have came from Noah's ark? If I were an evolutionary theorist then I would point out that we believe the ark happened only a few thousand years ago...not enough time to get all of this diversity. But how did it all come from the goo? Billions and billions of years. That I believe is the difference that they would argue for.

Again, not saying I agree...just wanted to give the other side, so we can "argue" most effectively.

Yeah, I knew ahead of time about the number of years being the thing, more time to allow for more evolution, but I still feel it is the right way to go, as a start...it points out that, either way, there are going to be assumptions...there are old earth creationists, and perhaps there explanations might be more well suited to the skeptics idea, but in any event, it still comes around to the Ark event not being a good place to start an argument...that is my point, philisophically speaking...

BTW, thanks for stopping by and adding your thoughts...to be truthful, I am glad someone who agrees with the Biblical record brought up the obvious objection...

I believe, help my unbelief.

>how did all the biological diversity of the earth come from the first species, or from some singular primordial goo?

May I recommend that you commence your quest for comprehension (if it is indeed sincere) here and here.

May I advise you that the comprehension of this material is not a matter of a glance or two; it would take me a semester of lectures to cover it properly.

And I ask you, in your quest for understanding, to confine yourself to the main-stream peer-reviewed scientific literature, not biblical denial material.

Of course, your charge also assumes that we are flying in the face of the "evidence." But that takes a very naïve view of the evidence. The evidence is theory-laden evidence, not raw evidence. And it also disregards the counterevidence.

And I ask you, in your quest for understanding, to confine yourself to the main-stream peer-reviewed scientific literature, not biblical denial material.

This is the view that instead of submitting our mind to God, we should submit our mind to the scientific establishment. That, somehow, scientific consensus or the hot new theory of the day should never go unchallenged. Yet science, if allowed to go unchecked, comes up with some intellectually suicidal theories of its own.

So you're not going to even try then?

>if that is the rationale against the Biblical record, and if that is such a problem,

I think it would be helpful to develop this concept before asking another question that appeals to personal incredulity.

I will take a look, yes I will, but I might ask you to think about your presuppositions as well as asking me to discount mine...

Oh, by the way (BTW), I am not mad at you at all for coming over here...I guess the best process would be a slow one, though, in order to avoid talking past each other or inferring offenses where none are meant...

That said, and in that regard, I count this as a clean slate for you and me...

In other words (IOW), I will try and give no offense as far as personal attack, only look at the beliefs, but of course I am a flawed human being (thus my belief in the need for redemption), and so ask your patience and forgiveness ahead of time, and I will offer mine to you...

Thank you, that is a reasonable attitude. Remember that "taking a look" may involve considerable study if you are to properly comprehend it. I am a professional biologist and will be pleased to help interpret technical terms and refer you on to other material.

I might also add that the covering of the earth by a mass of water so recently in geological history (boat building commenced well into the post-neolithic period) would leave masses of geological evidence, but to my knowledge none has been found. The simple physics of the water cycle precludes that notion. In other words, however hard, and for however long, it rained, the rain comes from evaporation from the sea. There is a finite amount of water. That is primary school science.

As you know, Creationists frequently question the methods used by geologists and geochemists to assess the age of rocks, which is obviously critical in constructing the lineage of fossils. May I offer you study of this site which discusses such methods and also discusses the objections raised by Creationists.

Be patient Maalie, just as JD is being patient with you. I might even go so far as to ask that you be willing to read as much of what he asks as you are asking him to.

JD is a great guy, a good friend, and very bright, even if he isn't a scientist (I know we are best, but God couldn't let everyone just go hyppthesizing and testing, could He?) - be willing to hear his arguments as well, please.

We must remember that God is not bound by the laws of physics, chemistry, or even biology. He can work and create outside of time and space. He is the all powerful supreme super intelligent being that man cannot comprehend. He is the self-existent uncaused cause. He is the logical reason as to why there is something instead of nothing. Apart from a creator, science can pick the story up at the big bang and offer theories on all kinds of cause and effects leading up and through evolution to the present. But they are clueless as to offering theories on why there is something instead of nothing.

That's the bottom line Wayne. Would love some discussion on "cause and effects".

Halfmom, I have heard his arguments a thousand times. I was brought up a Christian until my eyes were opened.

Yes sir, and believe it or not, I have heard the arguments you proffer as well, I was brought up with them, and yet I will be lloking at your (others) evidence...would you be willing to read "Darwin's Black Box" by Michael Behe?

Earthship Volume I - Introduction: Noah was told by God to build an ark.

Noah was told by God to build an ark. Just exactly how God told Noah is left up to the imagination. The fact remains that the clouds on the horizon were revealed to Noah and even though he lived nowhere near water, he was inspired to build a ship. He must have experienced much ridicule for wasting time, energy, and materials on this ship. Inspiration, however, is more powerful than ridicule. Noah saw the clouds on the horizon and the coming flood, so he built a ship to float on the seas, for there was a time coming when there would be no land.